by jstimesen
in Business, National, Politics
0

Pilgrims disappointed after Pakistan rejects 586 of 1,496 visas of Indian Sikhs wanting to visit Nankana Sahib, the birthplace of Sikhism founder Guru Nanak, on his birth anniversary 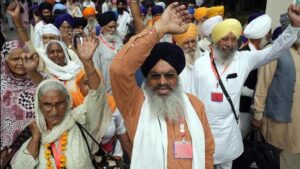 Sikh pilgrims entering Pakistan through the Attari-Wagah border near Lahore on Sunday. Hundreds of Indian Sikh pilgrims arrived in Pakistan to celebrate the birth anniversary of Sikhism founder Guru Nanak at his birthplace at Nankana Sahib near Lahore. (PTI Photo)

The Indian consular team in Pakistan is coordinating with the Sikh jatha (group of pilgrims) visiting gurdwaras during the week-long birth anniversary celebrations of Sikhism founder Guru Nanak Dev.

They are on the ground facilitating their safety and security during their stay in Pakistan. “@IndiainPakistan consular team is on the ground, with the Indian jatha visiting Pakistan for Gurpurb, coordinating with jatha leaders, local authorities for their safety, security and to facilitate their visit to various gurdwaras in Pakistan,” tweeted the High Commission of India, Islamabad.

Meanwhile, Sikh pilgrims have expressed disappointment after the Pakistani authorities rejected 586 visas, out of the 1,496 visas of Indian Sikhs wanting to visit Nankana Sahib, the birthplace of Guru Nanak, in present day Pakistan.

“The Shiromani Gurdwara Parbandhak Committee (SGPC) had applied for 1,496 visas, out of which, 910 were approved but 586 were rejected. The visas are valid for 10 days, and those whose visas were rejected are a disappointed lot. The government should not reject the religious visa,” said SGPC spokesperson Harbhajan Singh.

“Both governments need to provide the facility of on arrival visa. A visa office must open at the Attari-Wagah border. The buses that used to run earlier for facilitating darshan of the gurdwaras of Pakistan should be resumed. The Delhi-Lahore bus and Samjhauta Express should be back on track. We should connect people of both countries through religious places,” he said.

Guru Nanak’s birth anniversary celebrations are to be held in Pakistan from November 6-15. Harbhajan Singh said that the main function on Gurpurb will be held at Nankana Sahib on Tuesday.